The black cockatoos circled, keening closer, their wails perhaps mourning the loss of living things. “I’m glad,” said the older man, “that we could keep the arbutus. It is a wonderful tree.”

A dark and challenging novel that delivers a potent dose of madness, violence and erotic tension with the deliberation of a cannula. The characters’ psyches are built layer by contorted layer; truths are offered and then undermined; the reader teeters on the edge of resolution, only to be pulled back into the game. Plausibility is often stretched to the limit: Is the heroine’s androgyny credible? Would her lover really have planned such a spooky endgame? On both counts, the author builds a convincing case for her weird erotomania and her lover’s convoluted creepiness, and in the end, both their fates were easy to believe in. I rummaged in my reading history to find some novels that The Arbutus might echo. For the blending of the macabre and the world of nature (Peter has a thing about trees), I came up with Patrick Süsskind’s Perfume. For the exploration of twisted emotions, John Fowles’ The Collector and Sebastian Faulks’ Engleby came to mind. For gore, Jeffery Deaver’s The Bone Collector resonated. In the end, though, Bill East has created his own monsters. Crime thriller? Black comedy? Erotic mystery? Homage to trees? I didn’t care as I raced at top speed through The Arbutus.

A fast-paced and arresting journey into the mind of an obsessive. Peter is not a likeable character. His obsession with detail reminded me of Patrick Bateman in American Pyscho.

I liked the minimalist set up of the first half of the novel and this, together with the switch to first person narration in the second half makes for a most enjoyable read.

A chilling tale of intrigue, revenge and murder, ‘The Arbutus’ is a fine work by author Bill East. It is an ambitious work, but does not fall short in keeping the reader on edge right to the last page.

Some may be confronted by the disturbing detail in the vivid pictures painted by the author as he resolutely lures us into the plot. If you like to be gripped by suspense with little left to the imagination – ‘The Arbutus’ is your book. Gripping!

What a gripping and compelling read, one of those books you just cannot put down.

Some parts of the story line are very confronting but you are compelled to keep reading!

Absorbing, gripping, intelligent. The sentences are carefully constructed and flow together fast and fluently.

The climax is hair-raising. The Arbutus challenges your concept of a thriller.

A gripping and suspenseful read.

At times confronting, but full of intrigue and complex layers of emotion for the reader.

Congratulations! I really enjoyed it. It would make a great movie!

I did enjoy this book, the plot skipped along nicely, the descriptions of the bush were very evocative of the area.

Maddie’s mathematical processes were interesting, though I found some of the story confronting.

I just finished reading your novel!! It was really worth reading and I did enjoy the plot that was quite surprising (I do not read many thrillers, I am really novice in this genre so easily astonished).

Maybe next time when I am in Australie you can show me an Arbutus….and all the other botanicals you talk about, but please do not bury me below….

Thank you so much for letting me read your novel. 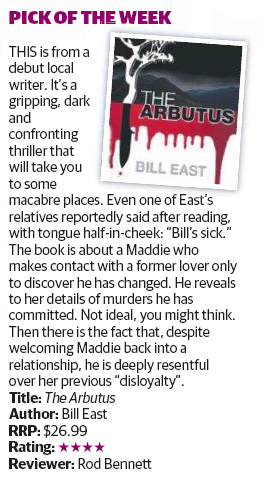 ‘The Arbutus’ was featured as the Pick Of The Week in the book reviews section of The Manly Daily on 10th March, 2017.